Following the international financial crisis in 2008, transport volumes decreased significantly in Iceland and the Faroe Islands but growth continued in the Norwegian market. The volume contraction in Iceland and the Faroe Islands was mainly in general and construction cargoes, while the volume of exports of fish and aluminum remained relatively stable. Volumes of seafood tend to maintain a certain stability compared to other cargo types, being mostly independent of other economic conditions. In recent years the total allowable fish catch in the North Atlantic has been strong and is growing. Fish farming has also been strong in the Faroe Islands and Norway and is growing in Iceland.

Transported volume in Eimskip’s liner services in 2016 grew by 5.9% from the previous year, mainly due to good growth related to Iceland and Norway.

As shown on the graph below on the left, transported volume in the Company’s liner services has gradually been increasing in recent years. The volume index on the right axis is based on the 2010 volume as 100. The other graph shows that almost 70% of the liner services volumes are related to Iceland.

Eimskip has defined its home market as the North Atlantic, stretching from the east coast of North America to the west and north coasts of Norway and embracing Newfoundland and Labrador, Iceland, the Faroe Islands and Norway. These countries are all rich in natural resources.

Seafood represents a substantial part of total cargo in the Company’s home market.

Eimskip constantly re-evaluates its sailing system and vessel fleet with the aim of optimizing its operational efficiency. One of the Company’s Strategic Priorities 2017 is SAILING SYSTEM AND VESSELS, where the main focus is on strengthening and optimizing the sailing system and on renewing the fleet and enlarging the size of vessels.

The most recent sailing system changes were made at the end of February 2017, increasing capacity to and from Europe and North America by 7-11%. A new Red Line was added to strengthen the services in Scandinavia and services to and from North America on the Green Line are increased with transshipments in Reykjavík and more frequency and additional capacity. Weekly coastal services are now offered to support increasing activities in Iceland, served by the Gray Line which also serves the Faroe Islands and the UK.

The Yellow Line offers weekly services from Iceland to the Faroe Islands, England and the Netherlands and then back to Iceland. The vessels serving on the Yellow Line are the Lagarfoss and Bakkafoss.

The Red Line offers weekly services from Iceland and the Faroe Islands to Denmark, Poland, Norway and Sweden and then back to Iceland. The vessels serving on the Red Line are the Ice Star and Ice Moon.

The Gray Line offers weekly services between Iceland, Faroe Islands, Scotland and England and then back to Iceland. The route calls several ports around the coast of Iceland. The vessels serving on the Gray Line are the Blikur and Lómur.

The Green Line offers direct services from Iceland to the east coast of the United States, Nova Scotia and Newfoundland and Labrador and then back to Iceland. The Skógafoss and Reykjafoss serve on the Green Line.

The Orange Line offers weekly services from Murmansk in Russia, down the Norwegian coast on its way to the Netherlands, England, Scotland and then back to Norway. The vessels serving on the Orange line are the Vidfoss, Holmfoss, Polfoss and Svartfoss.

Seven vessels serve Other Operations in the North Atlantic. Eimskip’s reefer transportation services are specially focused on transportation of frozen or chilled seafood and other perishable products in bulk direct from port to port, in whole or partial loads. These services are carried out by the specialized reefer vessels Langfoss, Stigfoss and Nordvåg. Eimskip offers specialized transport for bulk cargo in whole loads or by the needs of the shipper and the consignee each time. The Laxfoss is used in bulk transport. Finally, the ferry Herjólfur offers regular services between the Westman Islands, off the south coast of Iceland, and Iceland’s mainland, and the ferries Baldur and Særún serve on the west coast of Iceland.

SAILING SYSTEM IN THE NORTH ATLANTIC 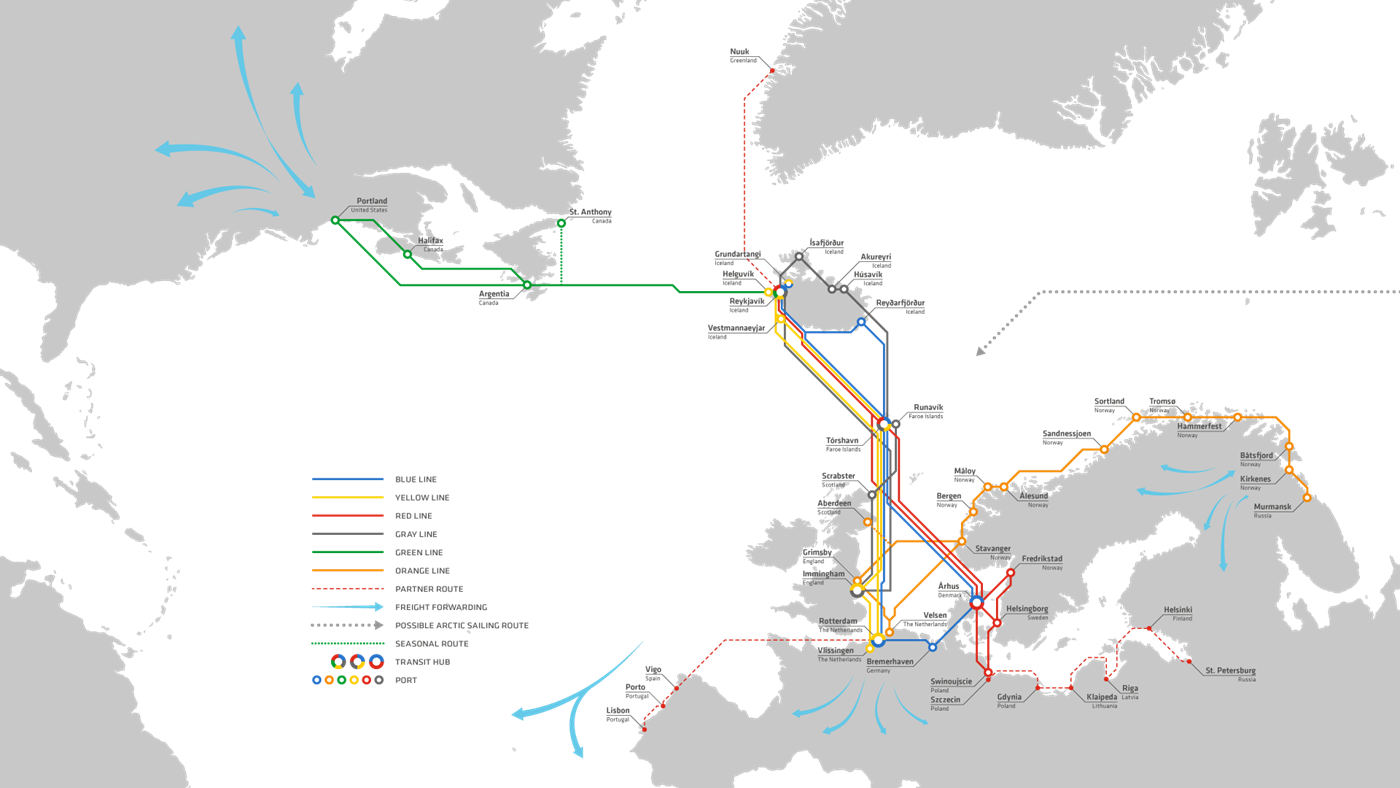 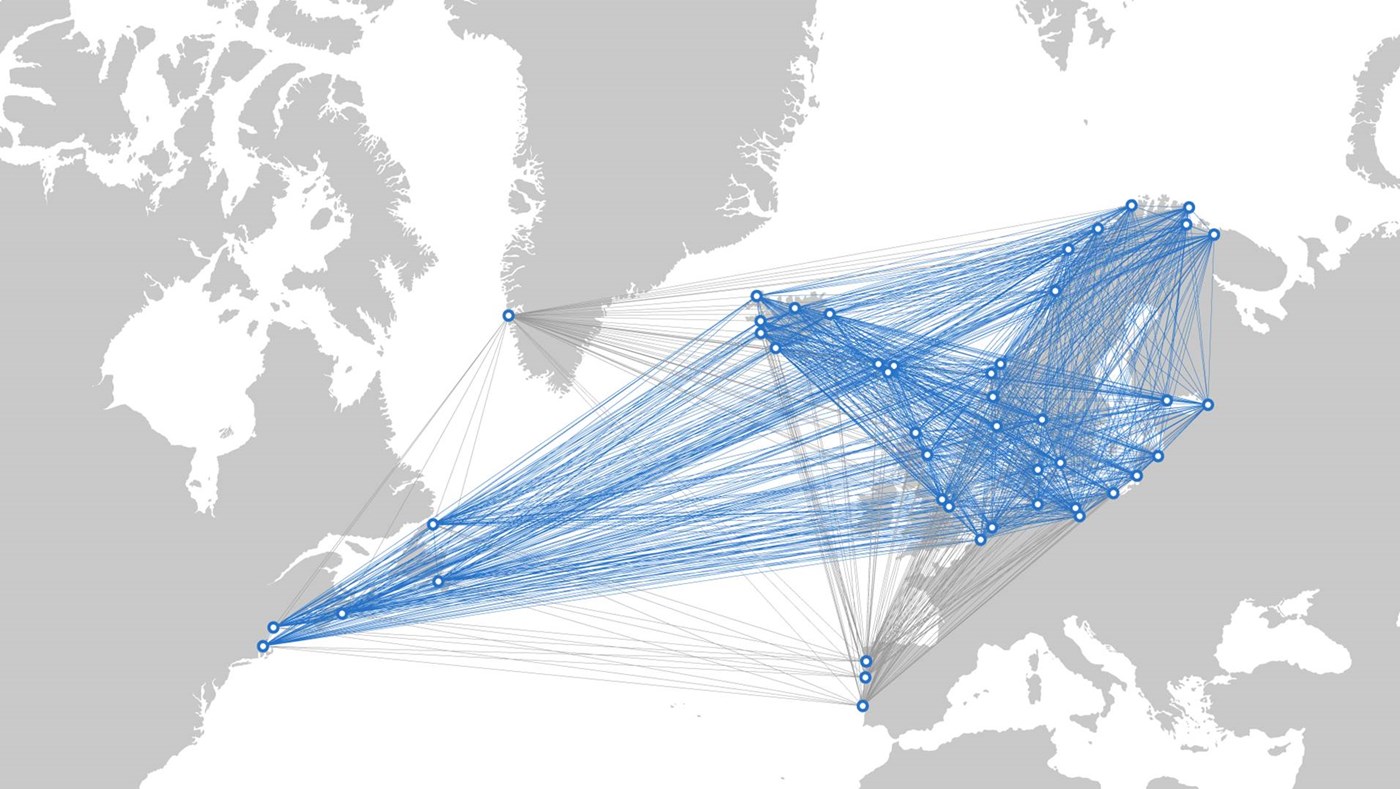 Eimskip currently operates 21 vessels in the North Atlantic, of which twelve are own vessels and nine are chartered. Fourteen are used in scheduled liner services on six different sailing routes, thereof ten container vessels and four reefer vessels. In addition, three reefer vessels offer spot services, one is in bulk services and three are ferries operated in Iceland. The vessels are highly competitive in terms of their size, cranes, reefer plugs, low draft and maneuvering capabilities to enter narrow ports. 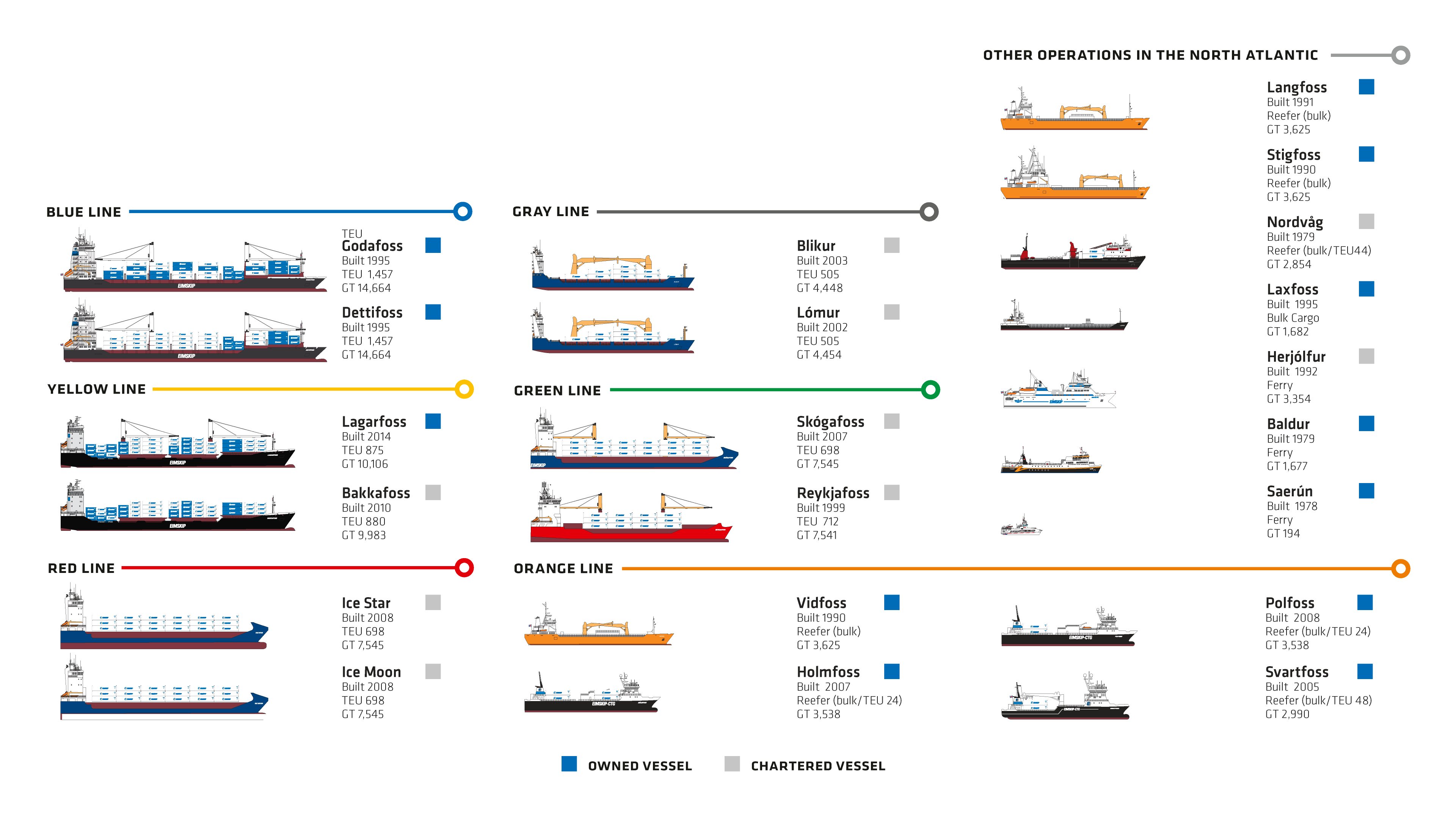 The Company operates terminals in thirteen locations in four countries: six in Iceland, three in the Faroe Islands and two each in Norway and Newfoundland and Labrador.

Eimskip owns or operates 14 chilled and cold storage facilities in five countries: five in Iceland, three in China and two in each of the Faroe Islands, Norway and Newfoundland and Labrador. Eimskip also operates a total of 26 warehouses for dry cargo in eight countries: 14 in Iceland, three each in USA and the Faroe Islands, two in the UK and one each in Norway, Sweden, Denmark and the Netherlands.

The Company’s container fleet currently consists of around 24,900 TEU (twenty-foot equivalent unit). Trucking and distribution services are operated in Iceland, the Faroe Islands, Denmark, the Netherlands and USA. The Company operates 424 container cranes and forklifts and 738 trucks, vans and trailers. 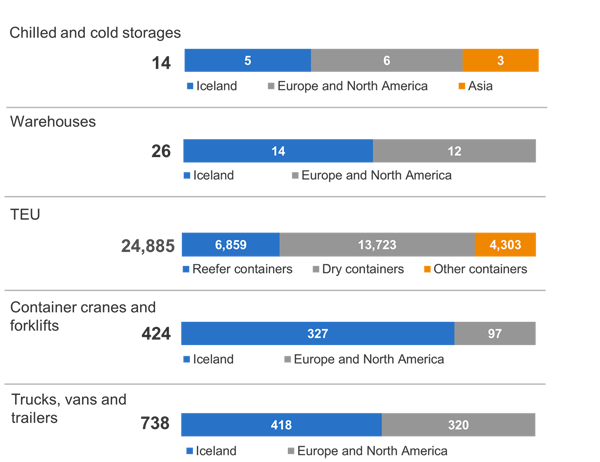 Eimskip and Royal Arctic Line in Greenland have evaluated their potential cooperation regarding building of three container vessels and sharing capacity. The two companies signed an agreement for the cooperation in January 2017, subject to notification to and confirmation from the relevant competition authorities if applicable. At the same time, Eimskip signed a contract with a shipyard in China on building two 2,150 TEU ice class Polar Code container vessels. These vessels will be built in line with environmental standards and are designed to be fuel efficient. The contract price of each vessel is approximately USD 32 million and the vessels are expected to be delivered in 2019. Royal Arctic Line also signed a contract to build one similar vessel with the same shipyard.

Eimskip signed an agreement to acquire the Norwegian shipping and logistics company Nor Lines AS in November 2016. The company serves Norway with five vessels, trucking services and terminals. Eimskip is waiting for the final conclusion of the Norwegian Competition Authority, but the authority issued a notice on an objection regarding the acquisition in February 2017.

Eimskip’s forwarding services are a network of the Company’s own offices and associates worldwide. They include international reefer forwarding and dry cargo forwarding.

Forwarding services are transportation solutions which are outside the Company’s own operating system; nevertheless, they and the liner services support each other. The international forwarding market is diverse and very competitive, with many companies offering forwarding services. Eimskip is following its customers in their globalization by creating a service network in cooperation with various transportation companies all over the world. This service network is constantly evolving and attracting new customers. Eimskip has built valuable relationships and acquired extensive knowhow in the reefer forwarding trade through its other operations over the years. The Company focuses on selling forwarding services by utilizing its global network and is specialized in transportation of temperature controlled cargo where seafood products play an important role. The Company also offers forwarding of dry cargo through various logistics solutions worldwide.

Eimskip has been expanding its logistics network in Asia. Since 2014 it has been a 30% partner in a joint venture with the Qingdao Port Authority operating a 50,000-ton cold storage facility in Qingdao. The port authority’s selection of Eimskip as a partner is an important factor in strengthening the facility’s operation and creating new opportunities. 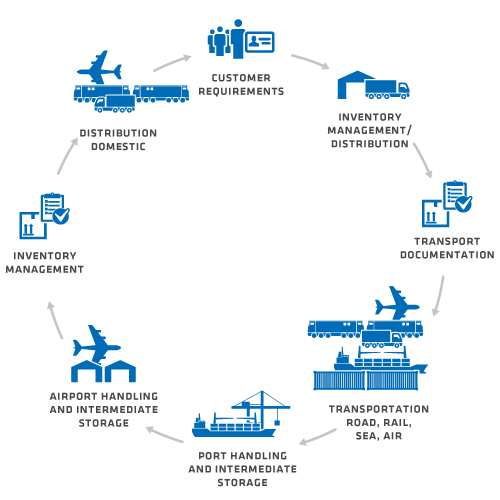 Cargo volume in international forwarding services is dependent on seaborne perishable reefer cargoes in which fish products play the most important role. The volume in reefer forwarding is more stable than in dry cargo forwarding due to reefer cargo being less dependent on economic fluctuations, since consumption of food products is usually more stable than other products. Other perishable cargoes are meat, fruit and vegetables.

Transported volume in Eimskip’s forwarding services in 2016, including reefer forwarding and dry cargo forwarding, increased by 4.8% from the previous year. The growth can mainly be explained by acquired companies and increased volume in dry cargo.

As on the graph on the left below, transported volume in the Company’s forwarding services has gradually been increasing in recent years. The volume index on the right axis is based on the 2010 volume as 100.

Eimskip’s global network currently consists of 60 offices of its own and 69 associates in a total of 48 countries in Europe, America, Asia and Africa. 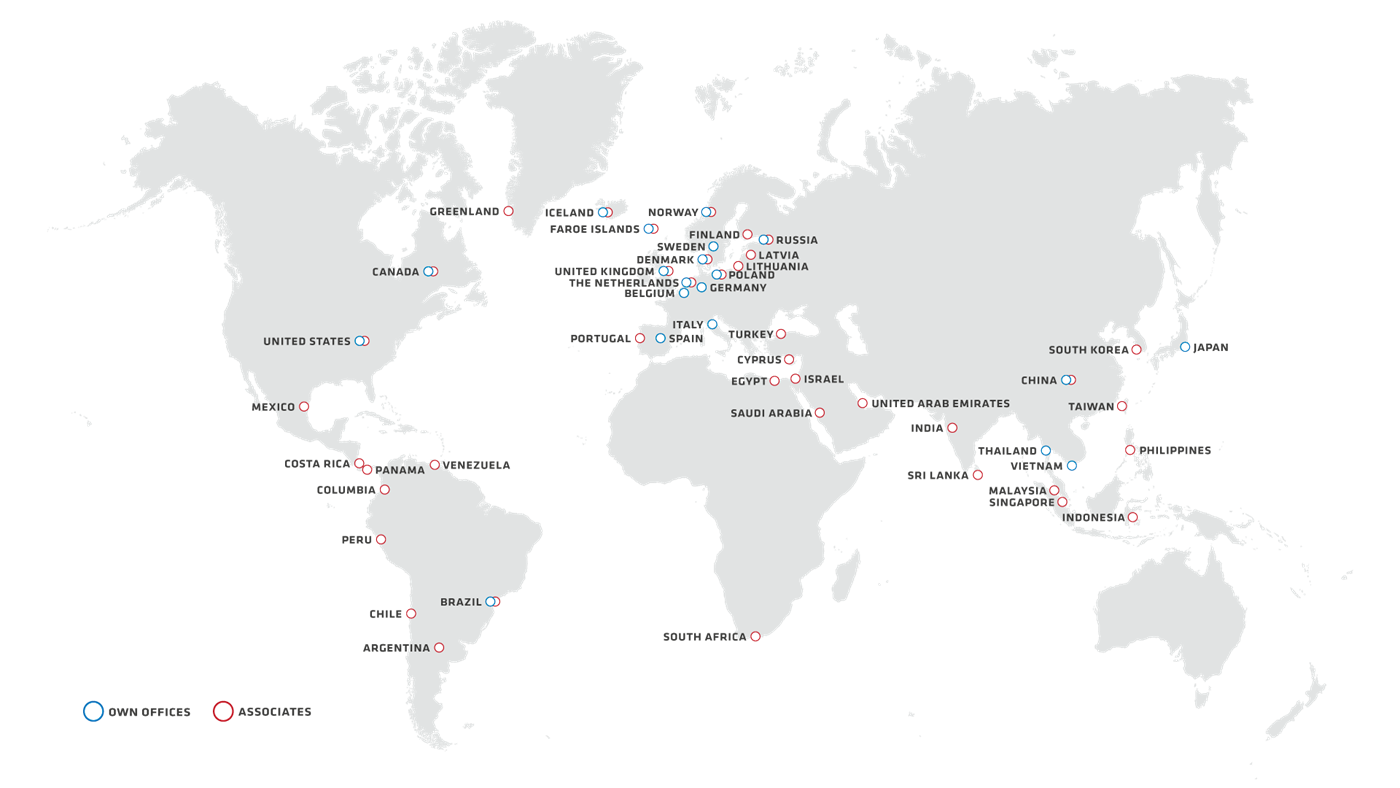 Eimskip acquired 90% of the forwarding company Extraco in Rotterdam in October 2016. In January 2017, Eimskip announced the acquisition of an 80% share in Mareco, headquartered in Antwerp, Belgium.

Eimskip has always maintained a strong focus on the services provided to customers and employees are dedicated to work according to the Company’s service policy. Under this, the Company provides total transportation services where customer needs and excellent services are the key focus, based on Eimskip’s values of Achievement, Cooperation and Trust.

NINE PRINCIPLES HAVE BEEN SET OUT AS A GUIDE FOR EMPLOYEES TO ACHIEVE THE SERVICE GOALS:

It is Eimskip’s firm belief that these principles reflect the Company’s service culture and how it and its employees present themselves towards the market. The fact that the service policy has become a part of the Company culture sets the course for employees, who all strive to provide the best services available.

The service policy is constantly being followed up, with special emphasis on further improvements in terms of speed and reliability. Results are monitored through regular customer satisfaction surveys and feedback over the past years has been good.

Eimskip has a strong position on the Icelandic market, a fact which further motivates it to be the market leader in offering excellent services. Having a broad customer base embracing a range of different needs, the Company must always come up with solutions which can serve the mass but at the same time remaining flexible and innovative as regards tailor-made solutions.

The need to provide fast and reliable international services has been the main requirement in recent years. Each and every link in the transportation chain has to work flawlessly in order for the Company’s front-line employees to be able to provide outstanding services. Eimskip’s Customer Relations Management (CRM) system further enables its employees to know customer needs. The ever-increasing pace of modern commerce demands constant adaptation to new technology and solutions to improve services further.

One of Eimskip’s Strategic Priorities in 2017 is IT, PROCESSES AND SERVICES, where the main focus is on integrating IT and processes to optimize service excellence.

The ePORT, the Company’s online service web for customers, is constantly being developed, updated and improved. The ePORT enables customers to access invoices and necessary documents online, monitor their orders and call up a simple overview of their transport activities.

Eimskip’s service portfolio also includes the eBOX, a clear and simple, user-friendly solution for smaller shipments from Europe and North America to Iceland. Through the eBOX, customers themselves can calculate the price of transportation door-to-door on the web and the Company’s transportation system makes sure that the shipment arrives in Iceland by the first available vessel.

Use of the ePORT and eBOX has been growing in recent years.